Posted on October 28, 2010 by Roulette Revolver

In lesson 3 we looked at image manipulation, its place in the media and were asked “when does enhancing an image becomeethically dubious?”

We looked at several cases where furore had ensued after an image presented as genuine, was found to be a composite and therefore a photo-illustration, not an original image.
Photos of a soldier in the Iraq war which were amalgamated to illicit a more emotional response, led to a high-profile sacking of an LA Times photographer. This fuelled the debate concerning the responsibility and ethical practice, people expect from the media. Some would say that “the world is not reality” such as digital retoucher Pascal Dangin, a man who is paid a fortune to make celebrities look even thinner, prettier, younger and more perfect and aesthetically pleasing to the eye, than they already are. Not all the stars are keen on the retouched look. For example, Kate Winslett famously spoke out against “excessive retouching” to an image of her that appeared on the cover of GQ magazine in 2005.

In the practical lesson we were again expanding our knowledge and skills, with the magical tools of Photoshop CS3. Lesson 3 focused on Retouching and Repairing images.

Using the Clone Stamp tool we repaired a torn section of one image, as well as removing several unwanted elements by brushing over them and blending them seamlessly into the background. Ok to do when you’re erasing water sprinklers, but ethically immoral when erasing a wheelchair bound cricket fan from the background of a photograph, as happened in the 1990’s in an image published by The Sun newspaper.

We were also introduced to the Healing Brush Tool the Patch Tool, as well as being encouraged to use the History palette as a lesson in efficient and safe working practices. Hear the History Brush Tool also came into play.
For another image (a portrait head shot) we used the Healing Brush Tool to enhance the appearance of the subject. Removing crows feet and wrinkles with this and the Patch Tool, we were given an introduction to the world of the aforementioned ‘Photoshop-ist’ to the stars, Pascal Dangin.

I have used that which I have learned from this and the previous lessons to ‘retouch’ a recent photograph of myself and my sister, taken at her birthday party, in August of this year. I removed lines from my forehead and face, removed red-eye from both of us and whitened my sisters already wonderful smile. Personally, I am happy with the original image, it does benefit from being sharpened and alterations to the colour and contrast. However, I enjoy the character and wrinkles my face is starting to wear at the age of 32. It shows one has lived and laughed. But, for the purpose of this exercise, I have enhanced the image in tonal range and colour contrast as well as sharpening it and altering the appearance of both myself and my sister.

Below is the image before as well as after retouching. I have also posted a handy You Tube video which shows you how to whiten teeth in a photograph.

This is the original image, uncropped. Note the red-eye and flat colours. As well as the worry wrinkles on my boat race!

The image has now been cropped down to create a more even composition. The colours, contrast, shadow and highlights have all been tweaked. The Healing Brush and Patch Tool have been used to remove wrinkles and blemishes and I masked my sister’s already brilliant teeth, to remove the slightest hint of yellow tones and give a more unrealistically super-white smile. I did this with the help of the video tutorial posted below. 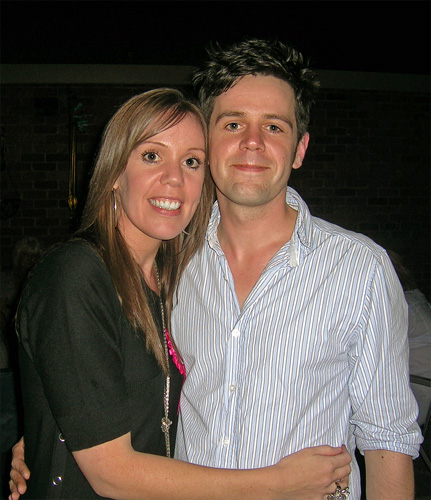 Handy You Tube video for getting those pearly whites, even whiter!

Click here to follow a link to an interesting article that talks about the history of image tampering.